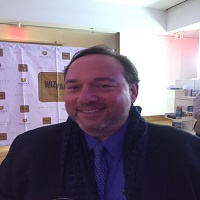 Not your typical lawyer, Michael has also been a partner in a record label with “Major” distribution where he’s overseen business affairs and creative development for the label and the launch of its debut artist, as well as its various music publishing affiliates.

He studied at Oxford University’s Magdalen College before graduating from Stanford with a degree in English in 1986 and then a law degree from Georgetown in 1989. After law school, he worked for several large Philadelphia firms, before starting his own firm specializing in the practice of entertainment law. He’s been blessed to have clients that have spanned every facet of the music industry in matters from entity formation and deal structuring to creative talent development and protection of all manner of intellectual property.

He’s also been a founding principal in Wonderland Entertainment, the multimedia production company/film studio started by the late Marc Rocco (whose film writing, production, and directing credits have included Murder In the First, Where The Day Takes You, and most recently The Jacket, among others), overseeing ongoing acquisitions and development that have included the life story rights of Bettie Page. He also has represented EMI/Janice Combs Publishing’s top songwriter, Jack Knight, in various ventures as a songwriter and book author, and recently has worked with EMI/Justin Combs Publishing’s Michael Winans, Jr., Shae Winans, and Shannon “Slam” Ridley in various music publishing, record production, and related matters, including most recently the Full Court Press album project featuring NBA stars and some of the world’s top hip hop artists as well as his new patented luxury lifestyle product the Wizpak.

He’s also counseled various independent record labels that have included Musical Fire Entertainment (Doesya) and Camden Records (Kate Bradshaw, Executive Slacks) in their formation and development, and publishing companies in the areas of music publishing, song collaboration, and development that has resulted in client song placements in feature films and television that include Rush Hour 2, Honey, Soul Plane, Scrubs, and Queer As Folk, among many others.

He’s also lectured extensively on entertainment industry topics for bar, industry and student groups, and in fact am featured on New Jersey Institute for Continuing Legal Education’s retail video, The Business of Music (taped from a live State Bar Seminar he conducted in 2002), as well as Comcast Cable Network’s Law Talk program on Entertainment Law that was first aired in February 2005.